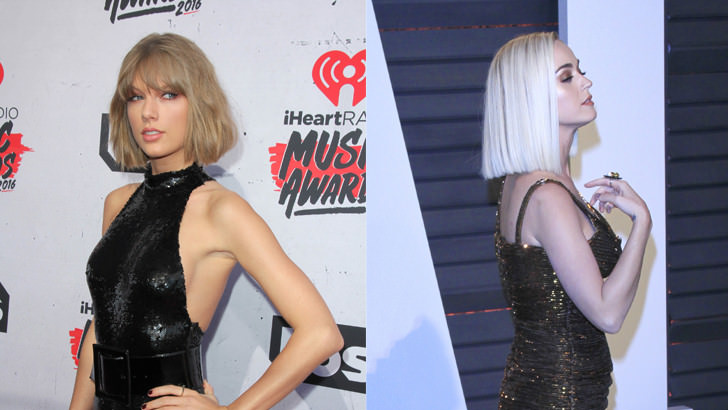 Over the past few years, two of the most prominent female pop stars of modern music haven’t exactly been BFFs.

Yes, the biggest pop star beef lately has been between Katy Perry and Taylor Swift.

So, let’s go over the crucial points in their, now, notorious feud and try to figure out who started it and who’s more likely to finish it.

Perry and Swift were almost like sisters during the first few years of their respective careers. They were close, supportive of each other, and were even joining each other on stage.

They stayed friends even when Perry began dating Swift’s ex-boyfriend John Mayer in 2012.

It appears that it all started when Perry decided to snatch a trio of dancers who were performing for Swift at her Red World Tour. She simply took the 3 dancers for her own tour at the time, although Swift’s tour wasn’t over yet.

Swift later opened up: “She basically tried to sabotage an entire arena tour. She tried to hire a bunch of people out from under me.”

It was time for revenge. Back in 2014, Swift released a single called Bad Blood, and it was rather obvious it was about her former friend, Katy Perry.

She even revealed during her 2014 Rolling Stone cover story that “Bad Blood” was about a fellow female pop star.

“For years, I was never sure if we were friends or not,” Taylor explained. “She would come up to me at awards shows and say something and walk away, and I would think ‘Are we friends, or did she just give me the harshest insult of my life?’”

Soon, Nicki Minaj found herself tangled in this sticky web weaved by Swift and Perry, and decided to be team-Perry.

In 2015, Minaj couldn’t handle the fact that her video for “Anaconda” lost Video of the Year award to Swift’s “Bad Blood” video, so she wrote: “If your video celebrates women with very slim bodies, you will be nominated for vid of the year.”

Swift, of course, right away assumed Minaj was pointing a finger directly at her, and wrote the following:

“I’ve done nothing but love & support you,” the singer responded to Minaj’s tweet. “It’s unlike you to pit women against each other. Maybe one of the men took your slot.”

However, Swift and Minaj soon buried the hatchets. It was at the 2015 VMAs during which the two performed Bad Blood together. Crazy stuff.

Swifts now decides to lay low and keep herself away from the public eye for quite some time.

Fast forward to May 2017 and Perry surprises fans with her own Nicki Minaj collaboration on song called “Swish Swish” in which Perry rather conspicuously counter-attacks Swift’s Bad Blood.

The video for Swish Swish just got out, check it out:

Now, even though we all thought Minaj and Swift managed to mend their relationship, her guest appearance on Perry’s new song further fuels speculation that the track is, indeed, the long-awaited response to “Bad Blood.”

Soon afterwards, Swift’s ex-boyfriend, producer and superstar DJ Calvin Harris, who was also preparing his new album “Funk Wav Bounces Vol. 1,” announced the album will feature many guests, which will include both Perry and Minaj.

(RELATED: Taylor Swift Has A New Boyfriend, Officially! But Who Is Joe Alwyn?)

Perry Says Taylor Is Trying To “Assassinate [Her] Character”

In her recent NME interview, Perry decided to elaborate on her feelings about her long beef with Swift.

“I mean, I’m not Buddha – things irritate me,” Katy explained. “I wish that I could turn the other cheek every single time, but I’m also not a pushover, you know? Especially when someone tries to assassinate my character with little girls. That’s so messed up!”

However, it appears that it is Perry who is constantly bringing up their feud, not Swift.

It’s June 2017, and Perry makes a tearful weekend-long YouTube live stream session to promote and support her new album “Witness,” and yet again she starts talking about Swift, only this time she decided to apologize.

However, on August 23rd, Swift revealed the album title of her long-awaited new LP. The album will be titled “ Reputation,” and the album cover featuring a tough-looking Swift and various newspaper-style fonts and headlines seems to allude to, you guessed it, their years-long beef.

Things are far from over. Stay tuned.